Tradition holds that the 69th Regiment of New York is the most highly decorated regiment in the United States. The 69th Regiment traces its lineage to 21 Dec 1849. After the failed “Young Ireland” revolt in Ireland in 1848, the locus of Irish revolutionary/republican activity moved to New York. The leaders of that movement believed they needed to create and train an Irish Brigade for the future liberation of their homeland, and then decided to do so in the New York State Militia system. They created three regiments in Manhattan: the 1st Irish Regiment, brought into the State Militia as the “Irish” 9th Regiment; the 2nd Irish Regiment, as the 69th ; and the 4 Irish Regiment, as the 75th. These three regiments are in the lineage of the 69th Regiment of today and co-existed until consolidated in 1858 as the 69th Regiment. Although the 69th only traces its history and lineage to 1849, one of its companies, “A” Company, traces its lineage to 1775 and the American Revolution.

Thomas Francis Meagher, as Acting Major, brought the Regiment back to New York and began raising a new Irish Brigade. On Corcoran’s release from prison, now Brigadier General Corcoran formed another Irish Brigade, Corcoran’s Irish Legion. Once again the 69th Regiment’s history and lineage traces through three regiments: the 69th New York State Militia, the 69th Infantry New York State Volunteers (1st Regiment of Meagher’s Irish Brigade), and the 69th (“National Guard”) Artillery (Serving as Infantry) New York State Volunteers, later changed to the 182nd Infantry New York State Volunteers, (1st Regiment of Corcoran’s Irish Legion). Many of the Regiment’s traditions come from the Civil War. Robert E. Lee is credited with dubbing the Regiment “the Fighting 69th”. The 69th carried green flags but the flags were so shot up at the Battle of Antietam (17 Sep 1862) that at Fredericksburg (11-13 Dec 1862) the unit didn’t have green flags and soldiers placed sprigs of boxwood on their hats, to show the green. After Fredericksburg, the 69th received a new green flag. On 28 June 1963, President John F. Kennedy presented this flag, the Second Irish Color, to the people of Ireland, the home of his ancestors, on behalf of the Regiment, it hangs inside the entrance of Leinster House, in Dublin, seat of the Irish Parliament. The Regimental Cocktail (one-part Irish Whiskey and two-parts Champagne), drunk at all ceremonial occasions, began when Meagher sent his aide looking for Vichy water for his Irish Whiskey, but he returned with Champagne. Timothy Donohue, Peter Rafferty, and Joseph Kelle were awarded the Medal of Honor during the Civil War.

In World War I the 69th was re-designated the 165th Infantry and ordered to active duty as part of the new 42nd “Rainbow” Infantry Division. The statue of Regimental Chaplain, Father Francis Duffy, stands in Duffy Square on Broadway between 46th and 47th Streets; another statue of Father Duffy stands outside the Post Chapel at Camp Smith. The renowned poet Joyce Kilmer, a Sergeant in the 69th, was killed in action in France. His poem, written during the war, “Rouge Bouquet,” is read at funeral services for all members of the 69th. “The Fighting 69th” is portrayed in the 1940 movie of the same name.

In World War II Donovan founded the Office of Strategic Services (OSS), forerunner of the Central Intelligence Agency (CIA). His World War I uniform is on display in the 69th Regiment Armory (68 Lexington Avenue, between 25th and 26th Streets). Donovan, Michael Donaldson, and Richard O’Neill received the Medal of Honor for their heroism during World War I.

Still called the 165th Infantry Regiment, the unit was activated for World War II – part of the 27th (“New York”) Infantry Division. Sent to the Pacific, initially assigned the defense of the Hawaiian Islands, in 1943 the 69th assaulted Makin Atoll in the Gilbert Islands. The unit later engaged in heavy combat on Saipan and Okinawa. Alejandro R. Renteria Ruiz received the Medal of Honor for bravery on Okinawa, the seventh 69th man to be so honored.

In the Cold War the 69th was prepared to deploy as infantry, in the event of a major European conflict. In the aftermath of the 1990/91 Gulf War, the 69th transitioned to Air Defense Artillery (1993/96) and then to Mechanized Infantry. The 21st century was less than a year old when, on the commander’s initiative and without orders, the 69th responded to the attack of 9/11/2001. The Regiment also offered its armory as the place where families of the victims of 9/11 could come for information and assistance. The Fighting 69th later provided security at West Point and other places before being selected to deploy (via Fort Hood, Texas) to Iraq in 2004/05 as the core unit of TASK FORCE WOLFHOUND (named for the Regiment’s Irish Wolfhound mascots), as part of the 256th “Tiger” Brigade Combat Team engaged in Operation Iraqi Freedom. Nineteen soldiers of the “Fighting 69th” were killed in action in Iraq.

Some three hundred fifty soldiers from the “Fighting 69th” volunteered, and were selected, for a deployment to Afghanistan (2008/2009). There were many Iraq veterans among the volunteers for TASK FORCE PHOENIX, part of New York’s 27th Brigade Combat Team. Four 69th soldiers were killed in action in Afghanistan. 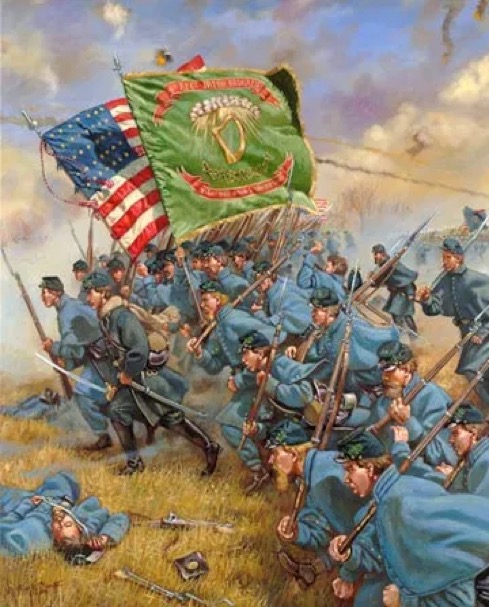